Although she has certainly been present all along, Durga truly powered into my life five years ago, almost to this very day.

It was the day my mother suddenly left her body – day three of Navratri – which is the culmination of Durga Ma. My mother had been at a Durgaratri for the full night before she departed. (Durgaratri is the one night Durga sleeps and her devotees stay awake all night holding the light for Her.) Durga was the very deity my mother called out to as she collapsed. She never got up. It was a most powerful exit indeed. Some sages say our whole life is a preparation for the moment of the body’s death. If we are truly dedicated to our practice, calling out to the Divine on our very last breath will be the most natural (and auspicious) phenomenon amid that all-powerful moment.

“Kumari” was my mother’s middle name – and refers to an embodiment of Durga in living form. The name is well known in some tantric lineages. She is the deity my maternal line dedicated their life-long practice to. Now when I call out to Durga, I am calling my mother in. Just as she did, when her mother collapsed and left her body on the steps of the shakti temple she had dedicated her life to, seven years earlier – also on the third day of Navratri (the culmination of Durga). My grandmother’s head to the steps of this shakti temple, in prostration. One final prayer. Ever since my biological mother left us – the Divine Mother has revealed Herself as my Mother. I no doubt received Her in the deepest and most expansive way – as a parting gift from my mother. Many deep and powerful experiences followed, both during practice and amid the flow of life.

I will be reflecting on and holding my maternal line’s strong commitment to this Devi devotion over these next 10 days, as we celebrate Maha Shakti – the originating seed of the Sacred Divine Feminine – in all her names and forms.

Durga is extraordinarily powerful. For She Is the great Cosmic Queen Warrioress who battles fear with fierce, graceful, unconditional love every time. Durga embodies courage, strength, and fearlessness. She fiercely guides us on the bridge from fear to love.

Simply put, she is the embodied seed strand of all that is feminine in this seeming world.

Durga is recognized as the Mother of the Universe, and as the force behind the work of creation, preservation, and destruction on our planet. Since time immemorial she has been worshipped as the supreme power (Shakti) of the Supreme Being (Shiva).

Among other titles, Durga is known as Devi, Mother, Goddess, Universal Mother, Divine Mother, Adi-Parashakti, Goddess Shakti, and manifestation of Mahashakti. She has one thousand manifestations in all including Kali, Lakshmi, Saraswati, Parvati, Jagadambe, Ambe, Mata, Bhavani, Sati, Parvati, Hemavati, etc. The forms of Durga may be portrayed as being both fiery and loving at the same time.

She originates from the Sanskrit word meaning “invincible.” The word Durga refers to a fort, or a place, which is difficult to overrun. She can also be defined as “Durgatinashini,” indicating “the one who eliminates suffering.”

Durga Ma protects her devotees from the darkness of the world, and at the same time wipes out their miseries. More specifically, she supports in rising above the negative energies linked with anger, greed, egoism, and false pride.

Like Shiva, Mother Durga is also referred to as “Triyambake,” meaning the three-eyed Goddess. Her left eye signifies desire (the moon), the right eye depicts action (the sun), and the central eye knowledge (fire).

Devi Durga stands on a lion in the fearless pose of Abhay Mudra, indicating a declaration of freedom from fear. The Universal Mother seems to be saying to all her devotees:

“Surrender all actions and duties onto me and I shall release thee from all fears.”

The lion Durga sits on represents power, will and determination. Riding this lion symbolizes her mighty ability in balancing all these qualities. This suggests to the devotee that one has to embody all of these qualities to get over the demon of ego (solely self-interest).

Durga’s Battle with Darkness to Restore the Light (Navratri) 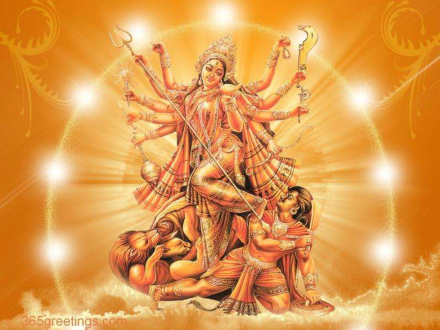 Durga’s birth is related to the slaying of the demon – Mahishasura – the Lord of the Asuras (darkness).

According to Hindu tradition, there was a demon that had taken over the heavens and Earth (Mahishasura), creating tremendous havoc. Mahishasura had two boons: no man could ever destroy him and no one from the Holy Trinity (Brahma/Vishnu/Shiva) could wipe him out either. Meanwhile he was unleashing massive unrest through his dark ways. The Holy Trinity then manifested Maha Shakti by each offering their power to an auspicous fire ceremony, in order to resurrect this originating seed of the Sacred Divine Feminine in the form of Durga Ma. Durga battled with Mahishasura for nine days, which is celebrated as the occasion of Navaratri. On the tenth day (revered as “Dussehra”), Durga cut off Mahishaura’s head with her sword of discernment, which cuts through all that is untrue (mitya), to restore that which is true (Satya). The cutting off of the head is a symbol of the removal of our own ignorance (darkness), so that unending peace, love and harmony may be restored. And essentially: Embodied Truth. The Lord of the Asuras, who was fated to be unconquered by a man or a god, was forced to bow down before a female, Ma Durga. The sheer power of the Divine Goddess Durga was no match for the demon, and after this nine-day battle, the Goddess eliminated all the evil (darkness/illusion/untruth) in the world.

As such, Navratri celebrates, honours and expresses gratitude to Durga, in all her names and forms. The main and most popular festival happens each spring and autumn according to the lunar calendar – although technically the occasion is recognized four times a year.

One Navratri translation is “the nine forms of Durga.” It is a most auspicious time when the Goddess’s presence is especially powerful. The veil between the worlds is very thin; She is listening for our intention and prayer, waiting to support us in bringing it to life. And so, it is a time of prayer, practice, honouring, and intention-setting. It is a time to go inwards, be silent, and deeply tune into the vast, spacious Divine presence within You, streaming through you. Utilize this high Shakti time to plant your seeds of intention and prayer, so Shakti Ma can help you cultivate your intended purpose!

It is a very potent time to reflect and practice, in order to help dissolve the fear that is influencing humanity presently. I encourage you to call on Durga to help restore unified love, peace and harmony – both within – and on our precious Mother Earth – the embodiment of the Sacred Divine Feminine.

If you are feeling the call, I suggest a mantra practice each morning and evening during these 10 days (including Dussehra). Choose a shakti mantra that is truly aligned with supporting what is happening in your life right now. Using a mala, chant a round of 108 each morning at wake up, and another round of 108 in the evening at sunset time, or a half hour before bed. Light your altar before chanting, and make some offerings to the Goddess in the way of light, incense, flowers, water from a natural source, and the sound of a bell. If you have something sweet in the house, this is good to offer too. Sit in meditation for 10 – 30 minutes minimum after your mantra practice to soak in the Divine Mother’s blessings, and to help radiate them outwards for the greater good of the Whole. Observe and see what happens over these 10 days! The Goddess will surely grace You with her presence…

And her main mantra is OM DUM DURGAYEI NAMAHA.

“Salutations to the one who bestows compassion, fearlessness and patience. Bless me with your protection and love.”

“Salutations to the feminine energy that protects from all negative/dark influences.”

For a deep practice outside of Navratri or following it, either mantra can be chanted 108 times for a minimum of 21 days (twice per day, once in the morning and once in the evening as noted above). For an even deeper dive, consider an auspicious 40-day practice. You can tether the first 10 days of Navratri/Dusserah onto either practice noted above. And then humbly receive Durga Ma’s gifts with an attitude of karma yoga, which means taking what comes as a blessing. All the while knowing that the Great Goddess only gives you what you are ready for, in the spirit of your next deepening, your next expansion, your next becoming. How deep will you go?

Much love & Navratri blessings to you! JAI MAAA!

Are you interested in learning more about an aspect of Navratri or Goddess practice? Write me here with your interest.

This article – in its original form – was written for Salt Spring Malas. The content was updated substantially in March 2020.